Bollywood Films and Filming Over Time. 2.0

So, we’re back, as promised! For those who haven’t read the first article on BOLLYWOOD FILMS AND ITS FILMING, we are adding a link here, go read and then continue reading this one. Or don’t! You will understand this one if you don’t read the previous one! After a good decade of the 1960s, we are here in the next decade, with all the cabaret, polka dots, chiffon sarees, Kashmir, Kishore da, Rafi Sahab, etc., etc. after that, we are now talking about films from the decade of 1970-1979. The films that were filmed on location, built some sets to match the requirements and so on….the decade is so much fun, for many reasons, I mean it was an amazing time for films no doubt. After all, this decade gave us... okay wait, let’s see what this decade gave us! (regarding locations and set designs) Let’s begin with it then;

The defining moment in the musical dramas of that era,

The film was directed by Kamal Amrohi, who was from Amroha, Uttar Pradesh. Amroha was a place which was known for its dancers and their havelis. The reason to mention this was that in the film, the Haveli where Saahibjaan (Meena Kumari) works is just like the haveli back in Amroha, which was the home of Mr. Kamal. The set stood up in Filmistan studios. The minute details of costumes and set were so amazing, the chandeliers were purchased from Belgium, the carpets used in the films cost in lakhs…. It is said that the film was written over the period of two decades and was a brainchild of Kamal Amrohi. There was a personal and professional crisis going on during the filming of this film. Meena Kumari was very much willing to support him as an actor and a wife for this film in any extent possible and she did so. Even after their divorce and after having detected a very serious disease, she shot the film in that critical condition. The passion and courage that she portrayed during that crucial time of her life is an example of work ethics and emotional attachment towards work! Also, she was paid only ONE GOLD GUINEA (coin) for the film. Well, Hats off! 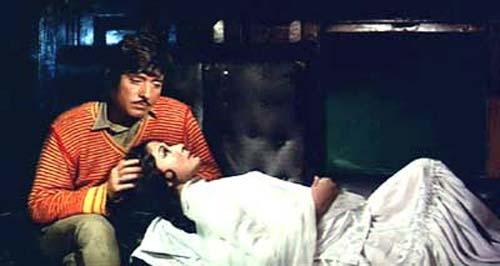 (tears are being shed)

Moving on. Hum tum ek kambre band ho aur chabi kho jaye, the biggest anxiety of our lives was given to us by this film, this song; 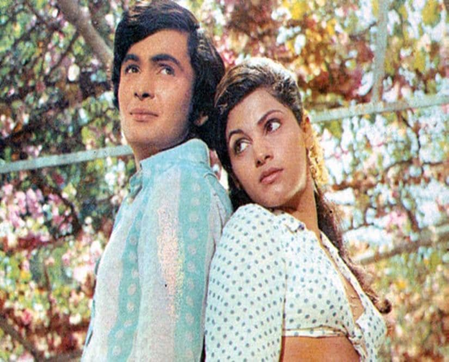 Our very own, Rishi Kapoor once said that and I quote; “It is a misconception that Bobby was made to launch me as an actor, it was made to pay off the debts of ‘Mera Naam Joker’ and father did not have money to cast Rajesh Khanna in a film hence I was the one to act!” Bobby was a love story between two very young people! The film had to be beautiful, so this film was shot in Jammu and Kashmir, in Gulmarg! Though some part of the film was shot in Kashmir, the last part of the film was shot near to Pune-Solapur highway, near the city Pune, Maharashtra, in Loni Kalbhor, where Raj Kapoor himself owned a farmhouse.

Aandhi was written and directed by Gulzar. The songs were also written by Gulzar himself, like obviously! And they were a hit of that time. ‘Tum Aa Gaye Ho’ was shot in, wait for it…. Srinagar, Kashmir, at the phenomenal Pari Mahal. The bricks, greenery, and the scenery of the song were just so amazing, ‘Is Mod Se Jaate Hai’ was shot in Gulmarg and the song ‘Tere Bina Zindagi Se Koi Shikva Nahi’, was shot in the Anantnag City in Kashmir Valley, in the Martand Surya Mandir, where J.K. and Aarti have a heart to heart talk with one another, exchange gestures and talk about emptiness and how there was no moon for almost 9 years in their lives (their separation period in the film) and then the song says, “Jee mein aata hai, tere daaman mein sir jhukake hum, rote rahe”, aah! What a moment! 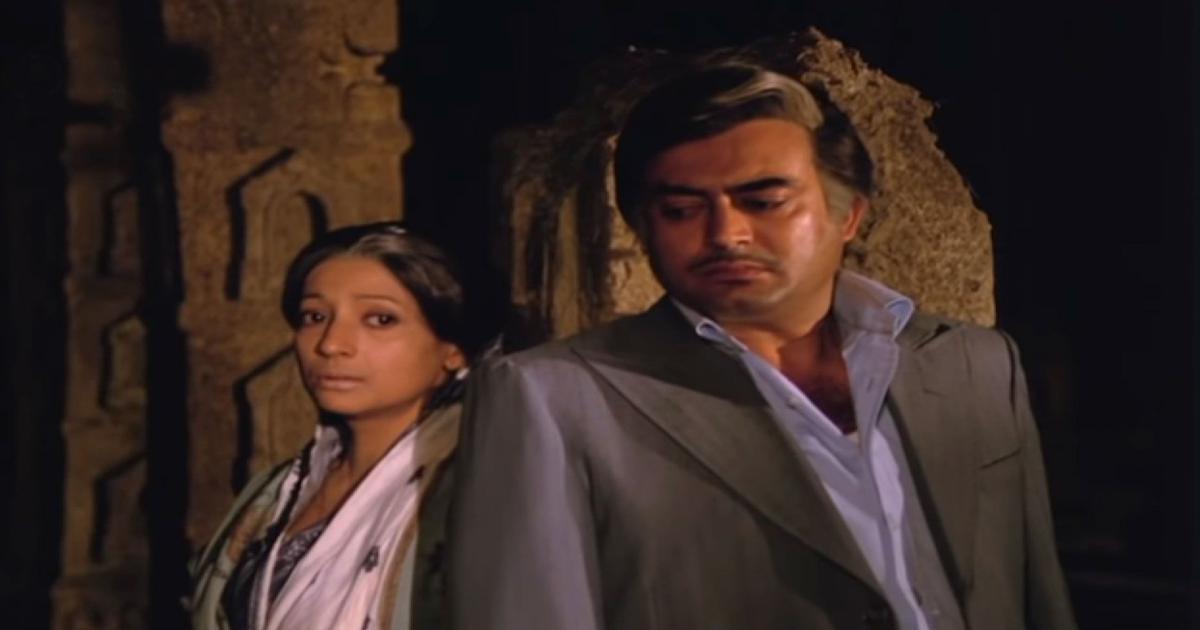 The film that changed the ‘Naksha’ of Bollywood, the Saleem-Javed masterpiece;

Ramgarh is not a place guys, I am sorry to break the news! Nope, it isn’t. Sholay was shot in a place named Ramnagar, near Bangalore, Karnataka. The art director of the film, Ram Yedekar, built an entire township in the region because Ramnagar was a rocky terrain with no townies. Now that part of Ramnagar is called “Sippy Nagar'' in honor of the director of the film Ramesh Sippy. The film took too long to complete, like very long. Some scenes took 19-20 days to complete, for eg. The song “Yeh Dosti” took 21 days to be shot! The production team of the film had to build an entire road for the film, a township, some other set details to get the perfect feel of the story! The classic films and the history that comes with them, oh what a treat!!!! 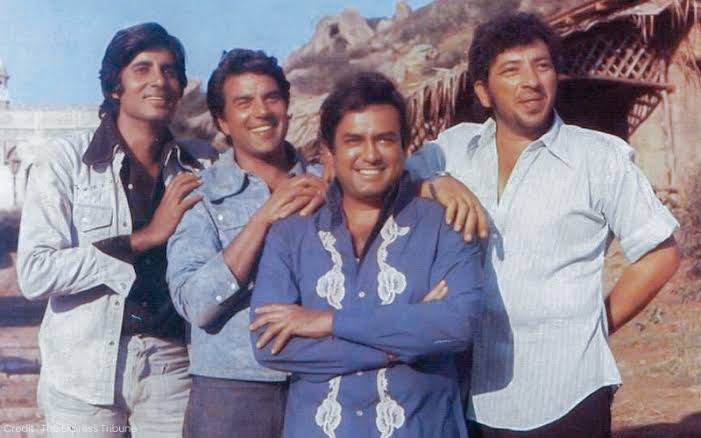 Yash Chopra was at the peak of his success when he decided to make an artistic, musical, romance. It was quite an experiment in a way. Lt. Yash Chopraji in conversation with our very own Karan Johar told us that the film was like a honeymoon as Rakhee and Waheeda Rehman, both were recently married and returned to work, that was the bloom of the beautiful 'Rishi-Neetu' love story. (internally crying and missing Rishiji) The film was shot in……. (heart eyes emoji) (eye roll emoji) (heart emoji) Kashmir, God the Kashmir fever is not ending anytime soon, is it? Well, why should it, right! The beautiful snow-clad mountains and the golden color of that snow when the sun rays fall on it, everything is worth capturing thousands of times. The critics while reviewing the film also wrote that “If you want to visit a garden, go no further than the nearest theatre and watch ‘Kabhie Kabhie’!” Yes, the film language changed, the filmmakers changed, the kind of stories made into films have changed but the critics, have not changed. It was difficult to please a critic, it is still difficult to please a critic! 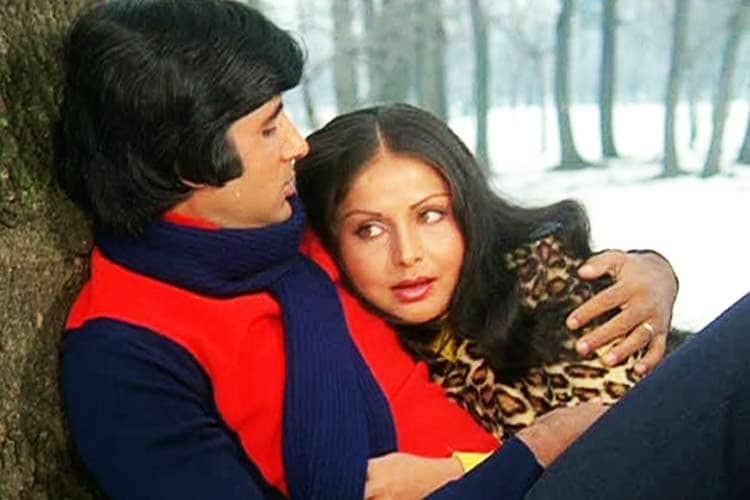 Well, the 70s was a blast, wasn’t it? I mean, look at how much Kashmir we have traveled through films! There can be another article written on the beauty of Kashmir shown in Hindi-Bollywood films, it's an altogether different topic. Classic films and how much goes on into making it, the films in that period were written with a lot of care and were written for a long period of time, Pakeezah was being written for more than 20 years, like who takes that much of time and hard work nowadays? We need that culture back! The story of Pakeezah, the emotions of Kabhie Kabhie, the characters in Aandhi, the songs in all of them, the beauty and innocence of Bobby, and well, Sholay just existing! Anyhow, let’s meet in our next article and next decade, tab tak, SAYONARA!

To see property details, you need to login to our portal.

Please wait while your location is being submitted...
(Do not refresh the page)

Find a customized location according to your need. Give us your requirement details and we will find a perfect match for you.