Bollywood Films and Filming Over Time

Bollywood and its classics! Some Chai, Popcorn, your loved ones, and a cozy afternoon, that’s all you need when you watch a Bollywood Classic! The action, the acting, the actors, the beautiful songs, dresses, faces, music, dialogues, scenes, places, and so much more.

We love all of it, and how! But, what goes behind making them a classic is an entirely different story. All the sweat, the traveling, the injuries, the dancing-in-the-ice-in-a-chiffon-saree, the leather-jacket-in-the-khet-of-sarso-in-sun, etc., etc. All of these things need a lot of energy, research, thought, money, and courage. The production teams of these films work very hard for the film to stand, and be released! The pre-production teams have many jobs, management, meetings, and many more, one of those jobs is the location hunting or the set design that the film is going to be filmed in. If it is location shoot, then looking after the noise, facilities, how it suits the scenario, etc., for more information about location recce and what to keep in mind when on one,  you can refer to our blog on the topic. (https://www.prorecce.com/blog_details/35) Some art directors prefer creating the magic of the location by making a set design replica of the same. While we are at it, let’s see what has the decade the 1960s done when it comes to Location Recce and Location hunting or set designing!

THE BOLLYWOOD film, the film that defines Bollywood, the one  to cross all the boundaries and records, the one and only,

The production design of this iconic romance was done by the art director Mr. M. K. Syed. It is still considered the most extravagant set design, one of the best creations of filmmaking. Mr. Syed built an entire Sheesh Mahal with Belgian glass (which, by the way, were hand shaped by the hand craftsmen of Firozabad! Thank god for these workers!), which was 150 feet in length, 80 feet in breadth, and 35 feet in height! just…. Just…. IMPOSSIBLE…. Right? All of this was done for that one epic song, “Jab Pyaar Kiya toh Darna Kya?”! It took 2 years to be built and in the year 1960, when its cost was almost more than INR 1.5 million!!!!! (OMG) The tents that were used during fights in the Mughal era, were built separately. Some parts of the set were also hand-painted. It is said that the director worked on this film for more than a decade and a half. 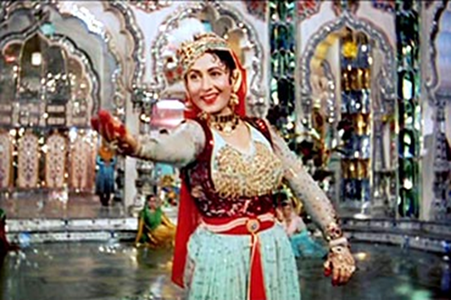 So, the film created history, being Raj Kapoor’s first color film as an actor, a director, and a producer! The film was also produced by Mehboob Studios. For the filming of one sequence in the film, Mr. Raj Kapoor convinced the Indian Air Force to do the Air Force scene in the film! Yes….. that’s right. For the first film to have been filmed out of India, it has a lot of traveling going on! The honeymoon sequence is shot in four different countries, Switzerland, Paris, London, and Venice. There are many locations and we are going to make a list of them down her

And hence, it started!

Yes! So much for setting a trend of love songs, at an exotic location (cough cough Switzerland).

Sayonara, I mean, the song, film! (not leaving so soon, nay nay) 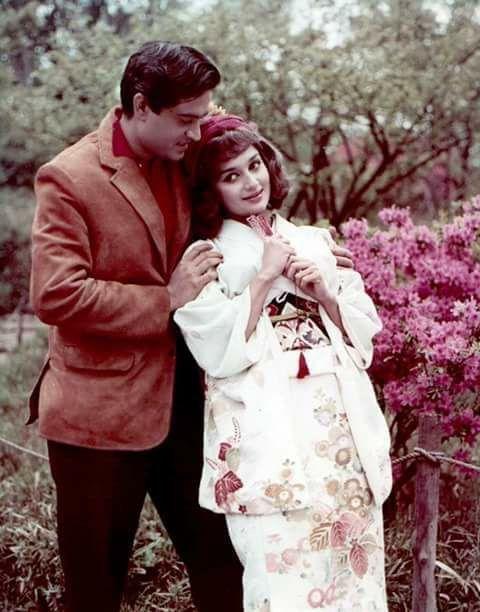 ‘Love In Tokyo’ is the last film of a trilogy filmed by Joy Mukherjee. The first two films were ‘Love in Simla’ and ‘Love in Bombay’, the series concluded with Love in Tokyo! The film is one of the first films to have filmed abroad. It was a treat to the eye of the viewer. The beauty of the country Japan and various locations is shown effortlessly! The song ‘Sayonara Sayonara’, which introduced the famous Japanese farewell to India, was shot in Hibiya Park of Japan. Some other places where the film was shot were Taihei Kaku Bridge, Garyu Kyo of Heian Jingu, Kintai Bridge, Tokyo Tower, Monorail, and also the Memorial of Cenotaph. This beautiful film, set in the beautiful country of Japan, with an amazing color palette is just an experience which mustn’t be missed!

The Fashion capital, no, the Love capital of the world, Paris: 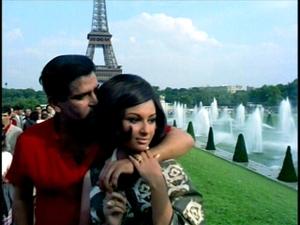 ‘Naam hi kaafi hai’ right? Well, this film is set in the Love capital of the world, the heart of France, Paris! Yes…..! It was not much common to shoot abroad when the film was made. Sangam and Love in Tokyo were the only films that were shot out of India by then, and well this film was a norm breaker of that time, first in many cases, the first time an Indian actress (Sharmila Tagore) wore a bikini, you go girl. The opening sequence of the film was shot in Reeperbahn, St. Pauli, Hamburg-Mitte, Germany! Yes! Also, some parts of it were shot near the Niagara Falls of the United States of America. The song ‘Deewane ka naam toh poocho’ was shot at Pont Alexandre III in Paris and some shots were also from Beirut, Lebanon, and Switzerland! Wooshh… so many locations and so many beautiful scenes… the production had some real money. Well, no! It Is said that the director took only 10 people with him to the abroad locations, even the Hairdresser had to do some scenes in the film. A very big ‘Karna Padta hai’ situation going on around, isn’t it? Well, that’s Bollywood for you guys!

Rajesh Khanna in a jeep, following Sharmila Tagore, who basically is in a train;

It was shot in Darjeeling, yes! The famous Darjeeling train is also seen in the film! So, then that’s it? It was shot there? Noooo…. because, as we all very well know, ‘Jaisa dikhta hai wasia hota nhi hai!’ That era had a trend of hanging a white curtain and projecting the video of the location that was needed. But that wasn’t the case in this film. I mean it was partially! Okay, it’s a little more complicated than that. So, this film has an amazing cheat game going on here. A great trick and good location sense can make any scene look real and truthful. It is said that the director of the film, Mr. Shakti Samanta, couldn’t match the dates of Rajesh Khanna and Sharmila Tagore. But he had to complete the song, ‘Mere Sapno Ki Rani’. So he had to take Kaka’s shots first, where he is driving in a jeep and following Sharmila Tagore, who is sitting on a railway! Only Kaka's scenes were shot in actual locations. Sharmila Tagore was in Mumbai, where she did the sitting and reading part in the train, which was erected in the studio and the curtain trick was brought into action. Well, huusshhhh! Then it was edited together and none of us could tell that it was not shot together! That’s amazing, isn’t it! 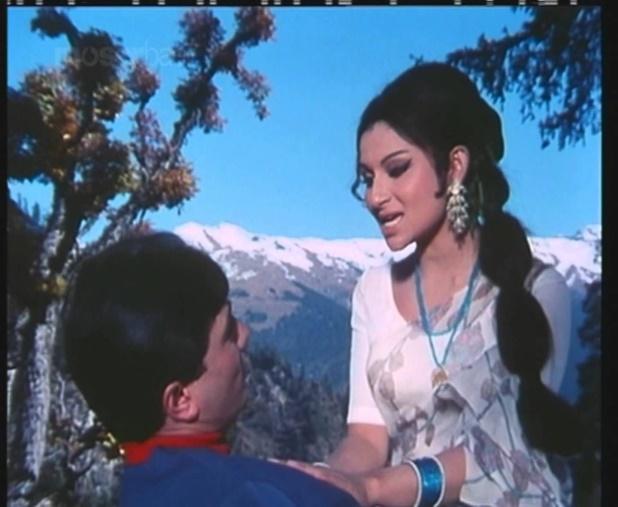 The decade of 1960-1969 was an epic one, considering the kind of films and the performances! The films have set some goals which are difficult to break even now. The sets of Mughal-e-Aazam, the cinematography of Aradhana, the locations of Sangam, the script of Love in Tokyo, the songs of An Evening in Paris! The golden time of cinema! The next decade is even more fun and amazing. Okay then! See you in the 1970s….. SAYONARA!

To see property details, you need to login to our portal.

Please wait while your location is being submitted...
(Do not refresh the page)

Find a customized location according to your need. Give us your requirement details and we will find a perfect match for you.